On October 31st, 2018, ICJ Canada recognized Professor Penelope Simons as the 2018 recipient of the Walter S. Tarnopolsky award, which is given annually to an individual who has made a significant contribution to human rights in Canada or abroad. The award ceremony took place in at the University of Ottawa, Faculty of Law's atria at the reception following the event "70 Years On... is Humanity Ready for a World Court of Human Rights?", hosted by the Human Rights Research and Education Center and chaired by ICJ Canada board member John Packer. 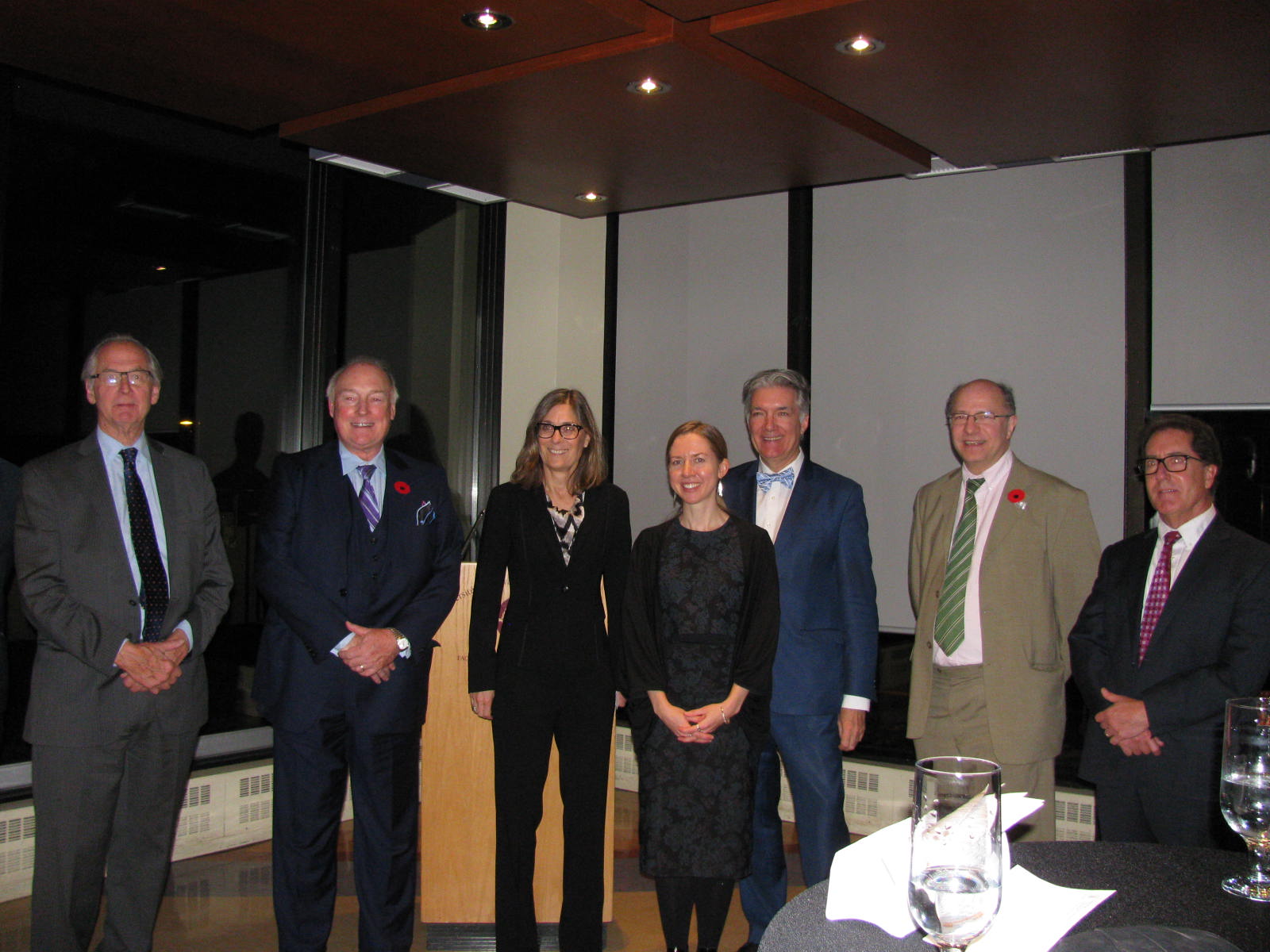 Prior to taking up her position at the Faculty of Law at the University of Ottawa, Penelope was a Senior Lecturer in Law at Oxford Brookes University, Oxford, UK.  She was called to the British Columbia Bar in 1996 and practiced corporate/commercial law with McCarthy Tétrault LLP.  She has also worked in the nongovernmental sector on peace and disarmament issues.

In this month which marks the 70 anniversary of the Genocide Convention,  and the Universal Declaration of Human Rights,  Canada  should demonstrate its profound commitment to both Conventions by actions that prevent the promise of “never again” becoming the reality of “yet again” as we are seeing too often, since the Second World War demonstrated most recently by the continuing unfolding of the genocide in Myanmar against the Rohingya people.

The International Commission of Jurists, Canada asks the Canadian government to  demonstrate leadership by demanding effective international efforts to protect the Rohingya that remain in Myanmar while also ensuring that any attempts to repatriate them back to Myanmar is not sending them back into a continuing form of genocidal repression. This is the minimum that our commitment to the Genocide Convention, the Universal Declaration of Human Rights and our own commitment to the global rule of law demands of us.

On August 25th, ICJ Canada board member John Packer and the Human Rights Research and Education Centre co-hosted a Symposium on the Legal Dimensions of the Rohingya Crisis with the help of guests such as David Palumba-Liu from Stanford University and Ashley S. Kinseth from the Stateless Dignity Program. The symposiums programme is attached to this post. The symposium is well time with the release of the United Nation Human Rights Council's Report of the Independent International Fact-Finding Mission on Myanmar  today on 27 August 2018. The UNHRC's report describes that the Rohingya crisis as a foreseeable, planned, and enduring human rights catastrophe, and makes several strong findings and recommendations.

ICJ Canada president Errol Mendes is urging Canada and all nations that are signatories to the 1948 Genocide Convention to support the UN report that  Myanmar’s top military generals, including Commander-in-Chief Senior-General Min Aung Hlaing, must be investigated and prosecuted for genocide in the north of Rakhine State, as well as for crimes against humanity and war crimes in Rakhine, Kachin and Shan States. See the UN Press Release: https://www.ohchr.org/EN/NewsEvents/Pages/DisplayNews.aspx?NewsID=23475&LangID=E

ICJ Canada Board Member and University of Ottawa Law Professor John Packer supports Bob Rae’s call for Canada to play a leadership role in addressing the Rohingya crisis. “Not only is this amongst the world’s worst humanitarian crises, but it is another threat to the international rules-based order presenting evident challenges for regional peace and security and sustainable peace and development in Myanmar and its neighbourhood. Canada is well-placed to step up with substantial humanitarian assistance, but also to press for accountability of those individually responsible for the crimes committed. In this regard, the ICC Prosecutor’s request for clarification of jurisdiction is a welcome development. But beyond humanitarian assistance and the fight against impunity, Canada should also lead in addressing the larger challenges of Myanmar’s State responsibility for the situation as a whole and in urging and assisting an appropriate inter-governmental approach, consistent with the UN Charter, to the root causes. Issues of human rights, democratic governance, and the Rule of Law – within Myanmar and at international level – are at the heart of these challenges.”

For more information on the Rohingya crisis, see this article by the Guardian, the report by Global Affairs Canada, and the ICC Prosecutors request.

For more information about ICJ Canada, view our mandate here. To purchase or renew a membership please visit our membership page.

Celebrating the 36th Anniversary of Canada's Charter of Rights and Freedoms

Today, Canada celebrates the 36th anniversary of the signing of Canada's Charter of Rights and Freedoms. The Charter was signed by then-Prime Minister Pierre Elliot Trudeau and Her Majesty Queen Elizabeth II on April 17, 1982. In 2015, 93 per cent of Canadians surveyed chose the Charter as the most important symbol of national identity, ranking it higher than the flag, the RCMP, the national anthem, hockey, the beaver, and the maple leaf.

ICJ Canada President Errol Mendes encourages all Canadians to reflect on the meaning of the Charter’s introduction and how it has shaped Canada since it came into force. The Charter guarantees basic rights and freedoms for everyone in Canada and continues to be essential in the protection of human rights, the rule of law, and the independence of the judiciary.

ICJ Canada president and University of Ottawa Law Professor Errol Mendes congratulates the University of Victoria on Canada's first Indigenous Law Degree. Indigenous and Aboriginal Legal Traditions are gaining traction around the world and we are thrilled to see this development coming from one of Canada's leaders in post-secondary education while promoting Indigenous law and faculty. This aligns with our mandate of promoting human rights and the rule of law throughout Canada and world and aligns  with the Truth and Reconciliation's recommendations to increase Indigenous knowledge and teaching methods into classrooms at all levels.